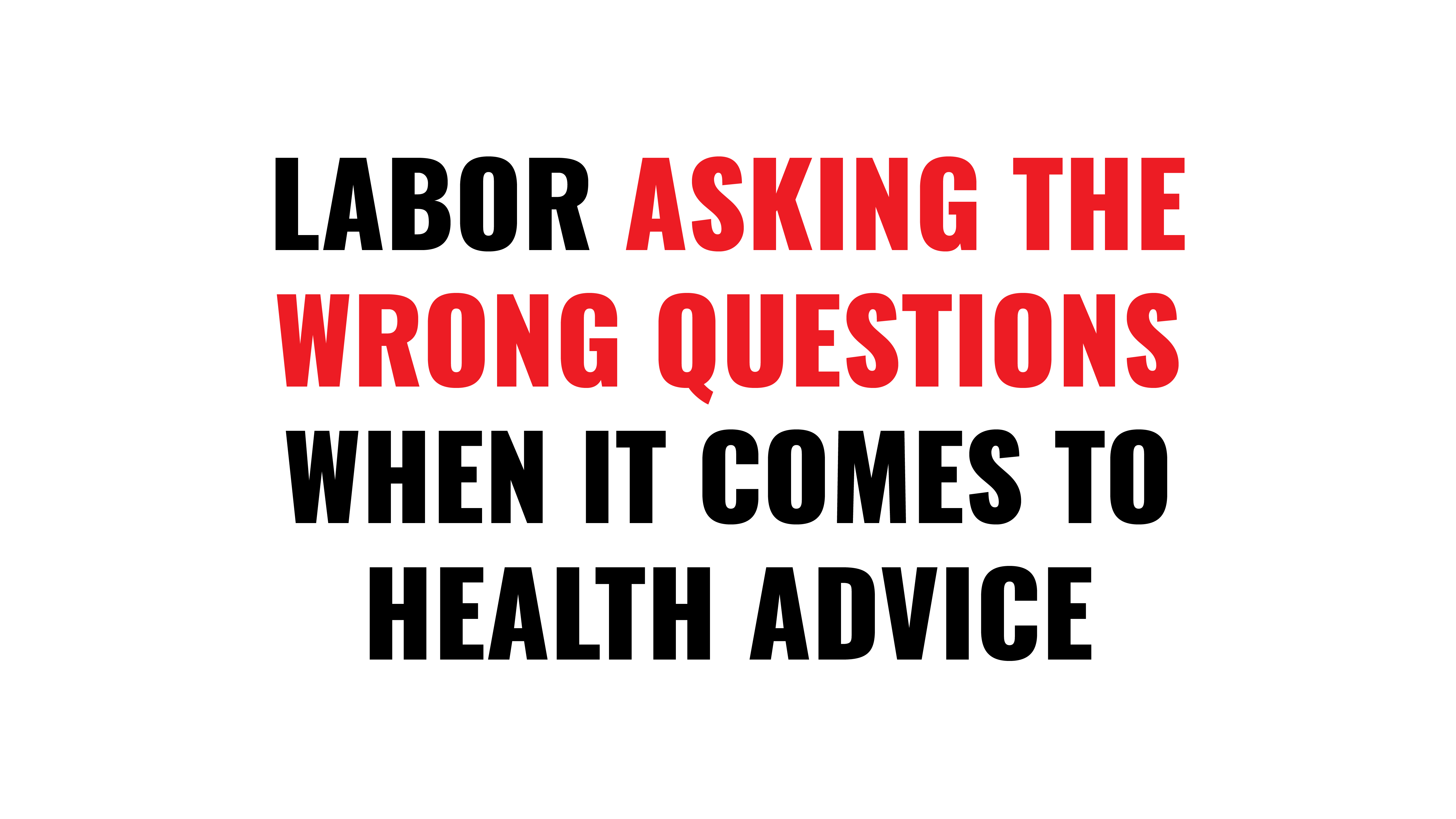 Labor asking the wrong questions when it comes to health advice

Labor is asking the Government for the wrong information when it asks it to provide the COVID 19 health advice.

The information the public need is the medical evidence that underpins the health orders and advice that has led us into the current lockdown and subsequent restrictions we are now experiencing.

Without seeing the medical evidence to justify the current restrictions, the public is subjected to draconian laws whilst this Government operates under a veil of secrecy.

The public is the curious child asking "why" and the Government, the unstable parent replying, "because I said so." Unrequired to justify because they are the boss.

The people of New South Wales deserve a better explanation than "because I said so."

The people of New South Wales can comprehend medical evidence, and they deserve to know why their civil liberties are being prohibited, in a chaotic manner, week by week.

Where was the medical evidence that supported weddings continuing in the first weekend of lockdown but then bumped onto the prohibited list the next?

The rumour is our illustrious Premier had a family wedding to attend and so the Health Orders were designed around her social calendar, as opposed to medical evidence.

When the public are not provided with adequate justification for Government orders, they seek their own answers.

By refusing to produce the evidence that underpins these Government decisions, Gladys Berejiklian and her team of health experts show contempt for the people of NSW, which is subsequently undermining the compliance of health orders.

This contempt and arrogance became evident again this week with a letter from the Chief Medical Officer (CMO) to Opposition and Crossbench members advising that Parliament should not return in August due to the health risks.

The letter comprised two vague paragraphs, stating that case numbers have not reduced, and vaccination rates are still too low. It is the CMO's advice that Parliament does not sit.

Case numbers are up because health orders have been vague and contradictory. They are hastily drafted and can be amended or removed in hours of their creation, making it difficult for the public to keep up with their legal obligations.

For example, the business assistance grants process was changed so quickly that those applying were forced to reassess days after accessing the information.

Consistency is key, and New South Wales has none.

Vaccination rates are low because the coalition has bungled the rollout at both a State and Federal level.

Since last year over 67 regulations have been made by this Government relating to COVID-19. Regulations do not require a vote on the floor of Parliament.

At a time when our freedoms are being removed, and unprecedented spending is occurring, this Government is operating without any accountability or oversight.

Democracy is being undone.

Nowhere in the CMO's letter to the Opposition and Crossbench was any medical evidence cited.

Nowhere in the letter was there an evaluation of the COVID safe plan for Parliament, designed by the Department of Parliamentary Services after considerable time and effort had been spent creating it.

No evaluation of advice from expert hygienists, contracted by Parliament, to advise how it could adapt its practices to sit in a COVID safe way was referred to by the CMO.

The CMO's two paragraphs inadvertently outline the Government's failure to control numbers and failure in the vaccination rollout.

The State Government will blame the Federal Government for how the vaccination has been rolled out.

The reality is, the Premier has been too busy basking in her popularity and the success of the initial response to COVID that she didn't see the forest for the trees. New South Wales had to go cap in hand to other States following vaccine supply issues blamed on Government mismanagement.

The poor messaging around vaccination has not played well either.

Initially, the Prime Minister told us we would all be vaccinated by October this year. That timeline has been continually pushed back, and now there is simply no clear messaging about timelines for 100% vaccination.

According to Professor Sarah Gilbert, the disastrous messaging surrounding Astra Zeneca, the architect of the vaccine, could result in "lives lost."

Initially, Scott Morrison screwed up the acquisition of adequate supplies of Astra Zeneca and, following a skirmish with the European Union, had to return some.

The Prime Minister and Premier have continued a daily routine of vaccination hokey-pokey.

One day Scott Morrison states vaccinations won't help lift current lockdown restrictions, the next day, Gladys says to get out of lockdown, we need vaccination rates to go up.

It all points to the Government making it up as they go.

Most would agree that a structured, clear plan is needed to guide New South Wales out of this predicament.

Parliament granted the Government powers in good faith with the expectation they would manage the pandemic in the interest of the State.

Through their fumbling, mumbling and bungling, the State Government have betrayed that good faith granted by Parliament, and now the people of New South Wale are forced to suffer that betrayal.

The Government needs to provide the evidence that supports the draconian measures taken to restore the good faith lost through their bungled handling of COVID 19.